Is it possible to interrupt Motion Task from another Task by using MultiTasking? 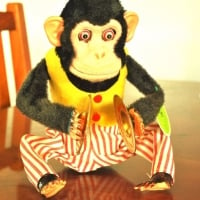 Hi, I'm thinking to interrupt a robot motion from another task by using MultiTasking. For example, if I run two Tasks at the same time, one is Motion Task, and the other is the Task that monitors the robot’s state/environment by using force torque sensor or camera.

Is it possible to interrupt the running single MoveL instruction halfway if the sensor  Task detects something? I’m asking this because I thought Motion Task might have a higher priority than another Task.