Problem with rotational components moving along a conveyor

I'm a beginner using RobotStudio and I'm really stuck with this problem.

I'm trying to programme a paint shop for vehicles, for my Master's Dissertation, with two main steps. In first step, the complete bodywork (chassis, doors, hood and trunk) arrives to the conveyor with all these components closed (like in the following picture) and some robots applies an external coat of paint to them.

In the second step, other robots open the doors and lift the hood and the trunk (like in the following picture) to subsequently apply an internal coat of paint to them. 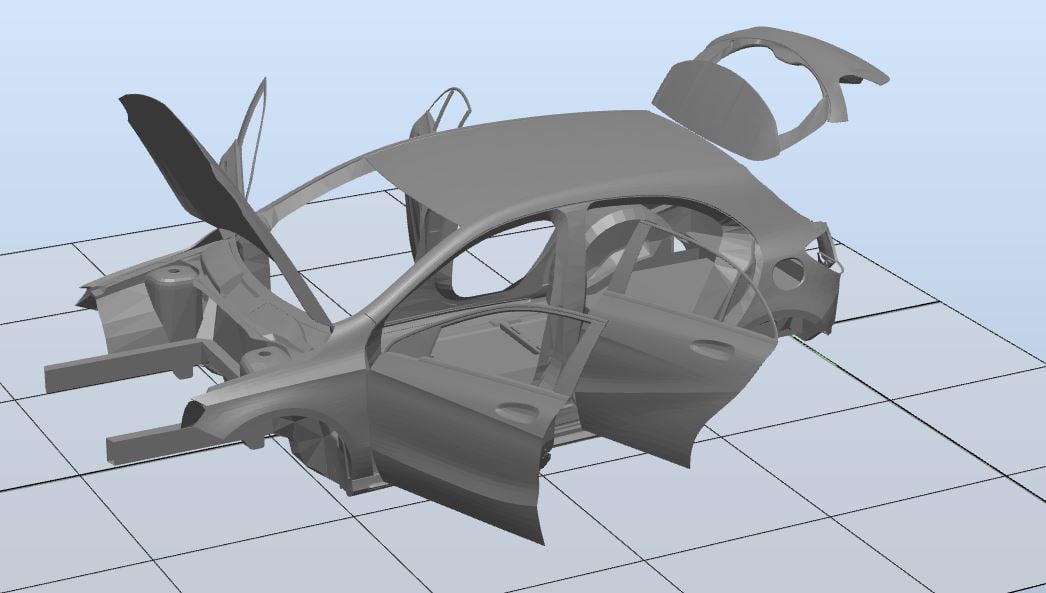 My problem is in the second step. I try to make the joints between the chassis and the rest of the components by different ways and none of them works fine when the conveyor moves them.

First, I tried to do it by putting Rotational Joints between every mobile part (with Dynamic behavior) and the chassis (with Kinematic behavior), then I grouped all parts in a Component Group and added this Component Group as the Object Source of the conveyor, but when the conveyor started the Rotational Joints didn't move concertedly with it and the mobile components crashed and lost their position.

Afterward, I tried to create a Mechanism with the chassis as the BaseLink and joints between mobile parts and the chassis, I grouped it with a simple box in a Component Group, in order to added it as Object Source of the conveyor, but when I tried to activate it with a Digital Output signal while it was moving along the conveyor, it didn't work.

I really need help with this because I need that robots work while conveyor is moving, without stop at any moment.
Does someone know how I can rotate (open) these components while the vehicle is moving along the conveyor?